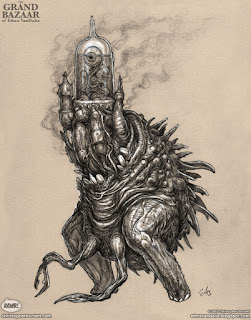 Mix all non-organic components in a churning bowl. Let mixture sit overnight in the night air for three consecutive nights. Each night at midnight add one drop of the tears of the dying into the bowl. Pour blood and bile into the bowl at first sunrise following the third night. Let sit and wait for five days. If at any time the mixture moves dose with boiling water.

On the second day of waiting, place eyes, aqueous humor, phlegm, and glass into the bladder and sew shut. Put this in a cool dark place for three days.

On the fourth day of waiting take remaining organic components and make a small pile in the center of the inside of the ruckle deer hide. Place a damp cloth over the pile and set it near a fireplace or similar heat source for one day.

Once the five days of waiting has elapsed scrap the contents of the churning bowl onto the pile of organic components in the middle of the ruckle deer hide. The non-organic ingredients should now be a gelatinous mass that is easy to shape and mold. Work the mass over all of the organic components making sure everything receives a thorough covering. Dump the mint leaves over the mass ensuring an even coating of leaves. Take the bladder and place it on top of the mass. Sew up the ruckle deer hide as tightly as possible leaving little to no space around the mass. Ensure there are no leaks. If any leaking occurs in the ruckle deer hide use tar to seal the breach.

Place the ruckle deer hide into a lower incubation chamber of an egg for three days or until the ruckle deer hide has lost all of its fur and has turned completely black. Once removed from the egg carefully cut the ruckle deer hide open. The new personal assistant will begin to move and emit smoke within a few moments of coming into contact with the air. If it fails to move, press firmly on its body until smoke is visible.