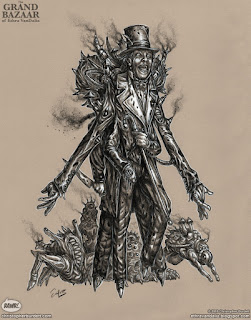 Not many know this, but I actually met Shaper once. I found him to be a very vexing and a rather peculiar fellow. Of course, he is a striking figure, everyone knows this, but it is his smell that struck me most. A most intoxicating aroma follows him, and it reminded me of when I was a child visiting my grandparent's cottage in the foothills of Thrakaa. The skies were always clear and bright in the foothills, the grass lush and green, and a cool breeze would blow up from the distant sea. Just thinking of Shaper reminders me of his bouquet and my childhood. How strange that I should associate these two? But I am getting ahead of myself.

I was newly a Seer when I crossed paths with Shaper. Those were heady days when I was just beginning to appreciate having full authority and power within the Impure Husk. We were still wearing those ridiculous purple hoods when leaving the tower, and our cloaks were a most unsettling mauve. I am so glad I eventually found myself in a position to change the dress codes. Some said it was a trivial waste of time and energy to care so about our garments. After all, we strive for truth and knowledge. I firmly believe if we do not care for how we look then others will not care for what we do or what we have to say. All the knowledge in the world is useless if no one will listen and learn from it.

As you know, we now wear ebony cloaks and vestments and most definitely no longer wear a hood when leaving the tower. I should really have a Psychometrician consult their subjects and derive the numbers from seeing how much better our information is being accepted by the populous since converting to the new dressing. They do say the clothes make the being!

How far I have come since those first days as a Seer. It sometimes sends my mind off in so many directions to think about how much I have seen and done over the years. Of course, I am stopped in thought when considering how long Shaper has been at the Bazaar, or Ethra for that matter. Gives you perspective for sure. All my accomplishments are just a drop in the bucket for a being that has lived thousands of years. Think of all those opportunities for exquisite meals and delicious drinks they must have had. That is of course if they, in fact, eat and drink. Can you imagine such a long life without the pleasure of a fine meal or to never have your thirst quenched with the best elixir? I would consider a shorter lifespan to afford myself five meals a day like any civilized being. Granted, if they don't eat, then they might not sleep, and that would certainly free up a lot of time to put towards your work. Perhaps that is how Shaper can make so many unusual and fascinating tools.

I believe it was dusk when I met Shaper. I was looking for a new restaurant in the Woven District that day. The restaurant served specially crafted meats produced by none other than Shaper. ‘Flavors never tasted before by any being’ was the restaurant's motto. I never did find the restaurant because it turned out that the restaurant exploded earlier that very day. I had yet to learn that Sem Tygo-Mees was in that very restaurant when it exploded. At the time I was just thankful that I already had lunch plans that day. While I was wandering around the alleys and streets of the Woven District with two very hungry Acolytes and an Organizer, I turned a corner and there he was, Shaper. Standing in the middle of the street he was unmistakable. Not many beings of his size or as well dressed. Shaper's suit was a dazzling metallic crimson, and it reflected everything around him. As he moved a beautiful display of light and shape would dance across the suit. I would certainly like to know who his tailor is!

Shaper and a team of Assistants were coaxing a Breaker into a cart when he must have noticed four members of the Impure Husk out on the town for the evening. Shaper came over to us and that was when I first noticed his aroma and all at once, I was in Thrakaa. It took me a moment to collect myself and remember my manors. I began to introduce myself when Shaper interrupted me with, "Nice hood, Clever One." After which he promptly returned to the Breaker and the cart. Such an odd fellow, but his fragrance is unmistakable.

For more samples of my work head over to my website: www.christopherburdett.com
Posted by Christopher Burdett at 9:30 AM No comments: 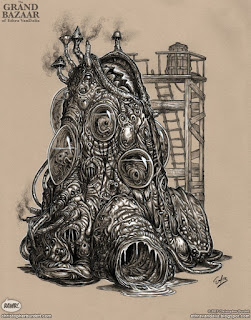 Since her arrival in the Bazaar, nearly two thousand years ago, Shaper has been making and selling living tools. Stories of how Shaper makes these tools are as varied as her creations. It is widely accepted that some fairly powerful magicks and unorthodox mathematics are in use. Even so, there remains a missing piece to the puzzle that is Shaper's work. A missing piece that no one has been able to recreate, which is how Shaper continues her monopoly on living tools. Through my research, this missing piece is a device or construct referred to only as the Egg.

While I have not been able to find any visual representations of the Egg, I have been able to uncover several descriptions. Of the dozen or so reports I have discovered, these three stand out. Nine hundred fifty-six years ago, Sysrus Ghet described the Egg as being, "Between five and six cubits in height. The sickly skin is fleshy and wet yet firm to the touch. The pale form is covered in holes from which Shaper's creations spring forth." Five hundred ninety-three years ago, Rhhutenfur K'lif Prex described the Egg as being, "A massive forty-six cubits in height, its black surface rippling with unseen power. All around its folded and creased form are large viewing ports where one can watch magick become life." One hundred two years ago Henturjox the Acclaimed described the Egg as being, "A grotesque blasphemy standing roughly twenty cubits tall. The form of the Egg is always changing - dripping, oozing, bubbling up, and caving in on itself. It is a nightmare made real. At the base can be found a massive belching maw that spits forth the vilest creations. These creations are little more than squirming feted sacks that give the appearance of life. The smell alone could knock a lesser being dead."*

Reconciling these three descriptions into one object is hard. It leaves me to speculate that either the Egg has changed over these many years or that there is, in fact, more than one Egg. The latter being most plausible simply due to the high volume of tools produced by Shaper. Since it is impossible to gain access to Shaper's tower, it is impossible to verify any of this myself. Much like the Gray Wanderer, the Egg remains one of the great mysteries of the Bazaar.

*It should be noted for transparency in my research that Sysrus Ghet, Rhhutenfur K'lif Prex, and Henturjox the Acclaimed were all thieves. Their descriptions are a result of them breaking into Shaper's tower. While some may discredit their accounts, just because they are thieves does not make them liars. It should be added that Sysrus and Rhhutenfur were listed as being murdered shortly after documenting what they had seen in the tower. Henturjox the Acclaimed was said to have lost her mind and committed suicide after recording what she had seen in the tower.

For more samples of my work head over to my website: www.christopherburdett.com
Posted by Christopher Burdett at 9:30 AM No comments: 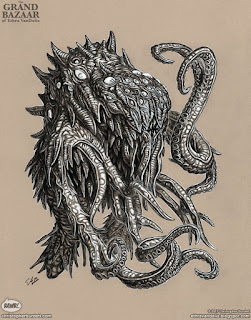 These beasts, nay, for beasts serve a purpose and have a place at the table of our Gods. These abominations have no place in our blessed realm. For these horrors are the manifestations of the tainted souls of the wicked and sinful. Those that turn away from the Gods and the path of Ascension are doomed to live again as monsters and cursed creatures. Those that seek violence, those that seek the flesh, those that speak in false tongues, these are souls that will return to plague us. Once a soul has turned away from the light of Ascension, it is forever lost to us. Dragged into the underworld, these souls are torn apart and reformed into horrors that wish only death to the living. One can imagine what these souls endure once they are twisted and remade into these abominations. Are they aware or are they no more than thoughtless monsters striking out in pain and confusion? The only kind thing to do is to end their existence as quickly as possible.

Perhaps one day our faithful and blessed Knights of Ascension will journey deep enough under the Bazaar to find a path to the underworld and the corruption that spawns these abominations. For today we can only hold them back when they claw their way to the surface. I have asked some of the High Scholars to push for an increase in the expeditions beneath the Bazaar so that we can stop these horrors at the source. Alas, my efforts continue to be slowed by those High Scholars that seek to study and learn from these monsters. What can we glean from this? The presence of these abominations in our temple can lead to nothing but the corruption of our most sacred and holy of places. I begin to wonder if the corruption has already taken hold in the temple and if these monsters have tainted the High Scholars. If this is indeed the case, I fear for the survival of us all.

For more samples of my work head over to my website: www.christopherburdett.com
Posted by Christopher Burdett at 9:34 AM No comments: