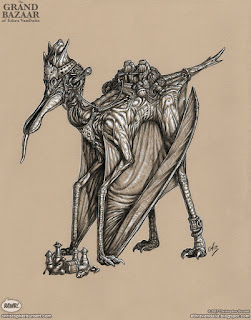 The Lammergeier have been one of the principal means by which large amounts of goods are transported to and from the air shops above the Bazaar. Used for centuries, the Lammergeier are renown for their high weight capacity and docile demeanor. Approximately one hundred and thirty-eight years ago the Lammergeier went extinct in the wild. At the time of their extinction, there were roughly one hundred Lammergeier still living and working in the Bazaar. Their numbers have since declined, and currently, there are only twenty-three remaining Lammergeier.

Lammergeier adults are generally twenty standard Bazaar cubits at the shoulder and have close to a one hundred cubit wingspan. Lammergeier coloration spans the rainbow, with their bodies ranging from blues, reds, yellows, and oranges with their wings completing the body coloration. It is not uncommon for vivid patterns and spots to doctorate the wings. Due to their extinction in the wild and limited breeding pool remaining at the Bazaar, the surviving Lammergeier have an off white body with patternless dark red wings. Their heads are bright red that transitions to the body coloration along the neck. All Lammergeier posses vibrant yellow beaks, pale blue tongues, and pale blue eyes.

Quirmiere’s Compendium of Beasts states that at one time the Lammergeier could be found across the entire northern hemisphere of Kiervis. There are numerous stories that during the mating session the skies would be filled with so many Lammergeier that they would blot out the sun. Mating for life, a female produces one egg every two years that the male tends until it hatches. The raising of young and hunting duties fall to the female, as the male tends the next new egg, which takes nearly a year and a half to hatch. Lammergeier mature quickly leaving the aerie in three years but will not reach sexual maturity for another fifteen years.

Having no natural predators in the wild, the Lammergeier are mild tempered and thus easy to domesticate and train. Their meat is described as being oily and lacking anything close to a pleasant flavor, but their eggs are considered delicacies and prized for their taste and texture. It is now a high crime with the punishment of death to own, transport, or consume a Lammergeier egg. Even so, eggs still go missing from nests.

Records obtained from the Lammergeier Handlers Union document the many attempts to increase mating and in turn increase the population. For the last thirty years, these attempts have failed. The remaining population has been taken off duty to prevent any accidental deaths. There is hope now that if the Lammergeier are no longer burdened with transporting goods that they may produce more young. The union has reached out to Ethra for assistance. As of yet, the union has not received a response.