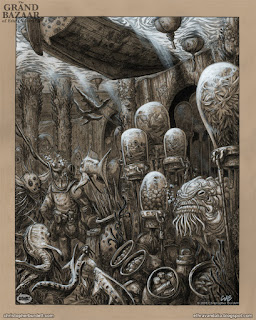 The greatest diversity on Kiervis can be seen between those that walk the land and those that swim the seas. Each can be utterly alien to the other, and yet eerily similar. The need to expand the Bazaar into the Zweoorn River and Uhtoo Bay was present from the moment the first stone of my tower was laid. The races of the rivers, lakes, and seas had a keen interest in trading with each other and those upon the land. Once the commerce began between those above and below the water their differences quickly became apparent.

For more samples of my work head over to my website: www.christopherburdett.com
Posted by Christopher Burdett at 11:01 AM