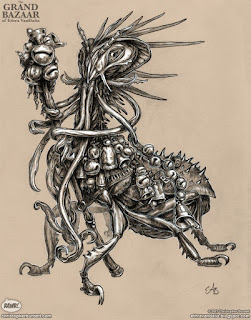 The Kreep are a puzzling race. While mentioned at length in Ferieal’s Zoography, Woodbane’s Journal of Beings, and Quirmiere’s Compendium of Beasts there is still no definitive theory as to where they originate or how their society is structured. The Kreep that have been documented stand between four to five standard Bazaar cubits tall. Their bodies range from dark green to a dusky gray with their backs spotted in white and yellow. Their eyes are a brilliant gold with flecks of black. The Kreep’s quills and tentacles can appear pale pink, lavender, or even orange.

A solitary Kreep will typically appear in a village, town, or even the Bazaar and wonder around ringing its bells while continuously vocalizing. The Kreep get their name from one of their more common vocalizations, or at least a shortened version of it. To this day no being has been able to decipher the hisses, clicks, chirps, and hums that are considered their spoken language. While Ferieal argues that these vocalizations are not a language, the fact that the Kreep appear capable of crafting bells, fabric, leatherwork, and various other handmade objects would give credence that they are intelligent enough to have a spoken language. Ferieal insists that the Kreep are mindless animals that merely collect found objects to adorn their bodies in the act of disguise, mate attraction, or similar instinctual behavior. From my research, this line of thought seems flawed. The Kreep seem drawn to locations inhabited by other beings. They call attention to themselves and attempt to interact with all they encounter. The Kreep are also meaningful with the use of their bells, and melodious patterns are present. Mindless animals are not known for any of these behaviors.

There are numerous records of Kreep appearing in the Bazaar, stretching back many hundreds of years. Most documents mention a Kreep wondering the streets while ringing and vocalizing before disappearing into the depth of the Bazaar never to be seen again or leaving the Bazaar after a few weeks. In Grgur’s Tome of Uncelebrated Events, there is a notably different record from Izlalish the Knowing involving a Kreep from seven hundred and sixty-seven year ago.

A somewhat confrontational Kreep caught Izlalish the Knowing's attention, and she documented its time in the Bazaar. For several weeks this unusually large Kreep had been ringing its bells extremely loudly, making quite the commotion. The Kreep would step into the path of shoppers, seemingly on purpose, knocking many to the ground. Needless to say, this was causing a certain amount of concern with area shop owners. The confrontations continued until the Kreep crossed paths with a Woofettes. The Woofettes behaved as Woofettes do and after a very brief exchange, it savagely killed the Kreep. The inability of the Kreep and Woofettes to communicate with each other did little to de-escalate the situation. Due to the unusual circumstances of the interaction, the fact that the Woofettes had consumed some of the Kreep, and that the Woofettes was quick with reimbursement to a shop owner for lost sales during the attack and subsequent eating of the corpse, there was only a nominal penalty fee assigned to the Woofettes. What makes this all the stranger is that a second Kreep appeared in the Bazaar the very next day and directly sought out the same Woofettes. Again, being a Woofettes, after a brief interaction there was another dead Kreep. A second attack got the authorities more involved, and the Woofettes was jailed for a short time. Upon the release of the Woofettes, a third Kreep was already waiting for the Woofettes outside the jail. In a somewhat daring move, this third Kreep engaged the Woofettes immediately, and the Woofettes killed the Kreep in front of the constables. After this third fatality, the Woofettes was banished from the Bazaar. A fourth Kreep was approaching the Bazaar as the Woofettes was escorted out of the main gates. The Kreep followed the much faster Woofettes until they were both out of sight to Izlalish the Knowing.

This record only asks more questions than it answers. I fear that the Kreep will remain a mystery as long as their language remains undecipherable.

For more samples of my work head over to my website: www.christopherburdett.com
Posted by Christopher Burdett at 9:00 AM