Keeper of the Clocks - The Grand Bazaar of Ethra VanDalia 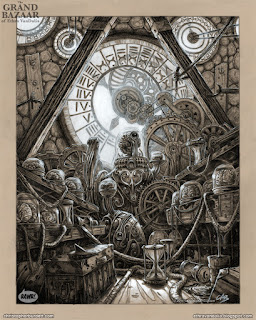 
To this end, I requested that clocks be created so that I might better understand the passing of time and align myself to it. I had hoped that the clocks would be to me as a lighthouse is to a ship in the night - a reference point to light the way. Unfortunately, the creation of the clocks was no easy task. My presence would affect the functioning of the clocks if I were too near them. They would speed up, slow down, or simply cease functioning. Yern Relliort, 6th High Sovereign of the Construct Guild, was yet another in a long line of those tasked with building me functioning clocks. She spent much of her adult life tirelessly working to create for me what so many others had failed to accomplish. The task was a heavy burden, and in time, death seemed to be nearing, and she was no closer to her goal than when she began. That was when Yern made an ingenious leap of faith. She had her brain removed from her body and placed in a vessel that was part of the clock’s workings.

In that very moment not only did Yern stabilize the clocks, but she also became the very first Yote. She passed beyond the flesh, and it would seem beyond the limitations of linear time. After the success with her enhancement, many of Yern’s construction team, family, friends, and even several pets volunteered to be installed into the workings of the clocks. They realized that Yern had opened the door to an existence that they had never imagined. The Yote in the clocks communicate with one another and ponder the cosmos as they ensure that the clocks continue to function without degradation.

For more samples of my work head over to my website: www.christopherburdett.com

Posted by Christopher Burdett at 9:30 AM