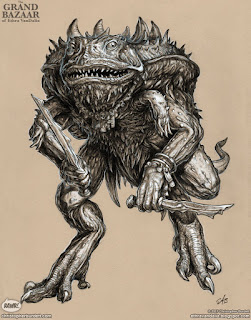 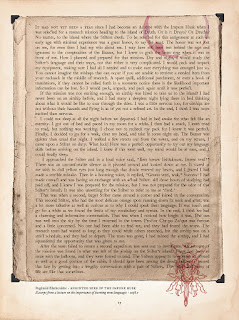 Excerpt from a lecture on the importance of learning new languages

It had not yet been a year since I had become an Acolyte with the Impure Husk when I was selected for a research mission heading to the island of Druth. Or is it Druya? Or Drutha? No matter, to the island where the Stilters dwell. To be selected for this assignment at such an early age with minimal experience was a great honor, to say the least. The honor was not lost on me, for even then I had my wits about me. I may have still been wet behind the ears and ignorant to the complexities of the Bazaar, but I knew to grab the brass ring when it was in front of me. How I planned and prepared for that mission. Day and night, I would study the Stilter’s language and their ways, not that either is very complicated. I would pack and unpack my equipment, making sure I had all I needed and to make sure everything was arranged just so. You cannot imagine the mishaps that can occur if you are unable to retrieve a needed item from your rucksack in the middle of research. A spare quill, additional parchment, or even a book of translations, if they cannot be called forth in a moments notice there is the likelihood important information can be lost. So I would pack, unpack, and pack again until it was perfect.

If this mission was not exciting enough, an airship was hired to take us to the island! I had never been on an airship before, and I had many a sleepless night lying there in bed thinking about what it would be like to soar through the skies. I was a little nervous too, for airships are not without their hazards and flying is as of yet not a refined art. In the end, I think I was more excited than nervous.
I could not sleep at all the night before we departed. I laid in bed awake for what felt like an eternity. I got out of bed and paced in my room for a while. I then had a snack, I even tried to read, but nothing was working. I chose not to recheck my pack for I knew it was perfect. Finally, I decided to go for a walk, clear my head, and take in some night air. The Bazaar was quieter than usual that night. I walked a few streets out from the tower, and on my return, I came upon a Stilter on duty. What luck! Here was a perfect opportunity to try out my language skills before arriving on the island. I knew if this went well, my mind would be at ease, and I could finally sleep.

I approached the Stilter and in a loud voice said, “Berr kreuw Iishlukmaw. Istrew verd?” There was an uncomfortable silence as it pivoted around and looked down at me. It stared at me with its dull yellow eyes just long enough that doubt entered my hearts, and I feared I had made a terrible mistake. Then in a booming voice, it replied, “Gruest verd, wuk.” Success! I had made contact and was having an exchange with an actual Stilter. All those hours of studying had paid off, and I knew I was prepared for the mission, but I was not prepared for the odor of that Stilter’s breath. It was also unsettling for the Stilter to refer to me as ‘food.’

That was when a second, larger Stilter came around a corner and joined in the conversation. This second Stilter, who had the most delicate orange spots running down its neck and arms, was a lot more talkative as well as curious as to why I could speak their language. It was touch and go for a while as we found the limits of my vocabulary and syntax. In the end, I think we had a charming and informative conversation. That was when I noticed how bright it was. The sun was well into the sky by the time I returned to the tower. Proctor Chr-po Za’que was furious and a little concerned. No one had been able to find me, and they had feared the worst. The research team had waited as long as they could while others searched, but the airship was on a strict schedule, and they had to depart. The team was gone, I had missed the airship, and I had squandered the opportunity that was given to me.
After the team failed to return a second expedition was sent out to investigate. An account of the mission was found in what was left of the airship on the Stilter’s island. There had been an issue with the balloons, and they were forced to land. The Stilters appear to have eaten all aboard as well as a good portion of the cabin. I should have been among the dead, and yet I missed that fate by getting into a lengthy conversation with a pair of Stilters. The twists and turns of life are like that sometimes.


Reginald Blatherskite - Anointed Seer of the Impure Husk
Excerpt from a lecture on the importance of learning new languages - 2038.7

For more samples of my work head over to my website: www.christopherburdett.com
Posted by Christopher Burdett at 9:06 AM