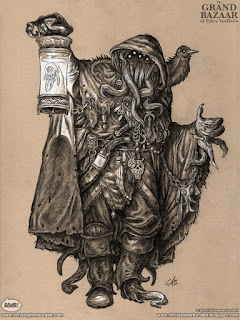 The Vault of Credulity and Vault of Advertence state that the Gray Wanderer is a ghost or similar malevolent spirit, but this does not explain many of the eyewitness accounts regarding its actions and behaviors. There are a great many records in Grgur’s Tome of Peculiar Events and Grgur’s Tome of Fugacious Events of the Gray Wanderer simply wandering along streets seeming to browse the storefronts. The Gray Wanderer is said to inspect the various goods for sale, almost as if it is trying to understand the items or ascertain their purposes. This is not the general behavior of the ghost population of the Bazaar. The physical appearance described in the witness statements also does not align with any ghost or specter on record.

Comparing the descriptions from Quirmiere’s Compendium of Beasts, the Ouroboros Chronicles, and numerous eyewitness accounts from the past several hundred years, the Gray Wanderer is described as being in the range of eight to ten standard Bazaar cubits in height. It has pale tentacles upon its in face, hands, and feet which lead some to believe that its entire body is covered in tentacles. Its eyes have been described as being a brilliant white, a dull red-orange of a dying fire, and even a swallowing black that is darker than the deepest cave. The Gray Wanderer is cloaked and shrouded in many layers of well-worn gray fabric and leather, which is generally believed where the Wanderer obtained its name. It carries a lamp of magickal or animal in nature and consorts with a bird, or similar creature, that never leaves the Gray Wanderer’s shoulder. All about its body are many talismans, bobbles, and chains made of pewter or similar metal, and when combined with its awkward gait gives it a singular sound as it walks.

My findings rule out the Gray Wanderer being a ghost and suggest that we are dealing with something that is unique, extremely powerful, and vastly older than previously imagined.