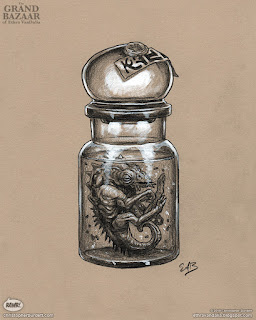 
Take the Wyrshlym of Thrakaa, for example. Shortly after I arrived on Kiervis, it came to my attention that one of, if not the most intelligent races on this world was on the verge of extinction. The Wyrshlym were small compared to the vast majority of the sentient races of this world. For even though they were small, they possessed the keenest of intellects. Unfortunately, to most other races, they appeared little more than a pest and a threat to livestock and crops. The Wyrshlym did not build great cities, nor did they wield powerful magicks. They were simple beings living day to day, at one with the world. I tried to intervene on their behave before I had built sufficient trust with the beings of Thrakaa. They saw me as an even greater threat than the Wyrshlym, which only accelerated their extermination. It was a common belief at the time that if I was trying to save the Wyrshlym, then they must be truly horrible. My mistake led to the extinction of an entire race, and it has weighed heavily upon me since. My hand in things must go unseen if I am not to disrupt the world any further, for my presence alone is a considerable disruption.

For more samples of my work head over to my website: www.christopherburdett.com
Posted by Christopher Burdett at 9:00 AM